What is ‘Club Day’

It seems these days they are a mixture of one or two, they have also been called Church Days, Gala Days or Field Days, and Whit Walks as tended to be held around Whitsuntide, this in fact may have roots in Medieval times and the ‘Fairs’  and ‘Markets’ that are held in other parts of the UK. ‘Club Days’ only seem to exist or have endured in provincial communities in Lancashire and Cheshire in the North West. The earliest in modern day format (allegedly) is Warrington with the first being 1834

They are annual celebrations, normally on the same date every year to avoid clashes with neighbouring towns but some say more recently it was to get the best bands, as the more popular got booked early. One of the traditional features of any club day or carnival procession  is a brass. pipe or walking band and is the first signal the awaiting crowds get that the procession, or parade is coming. 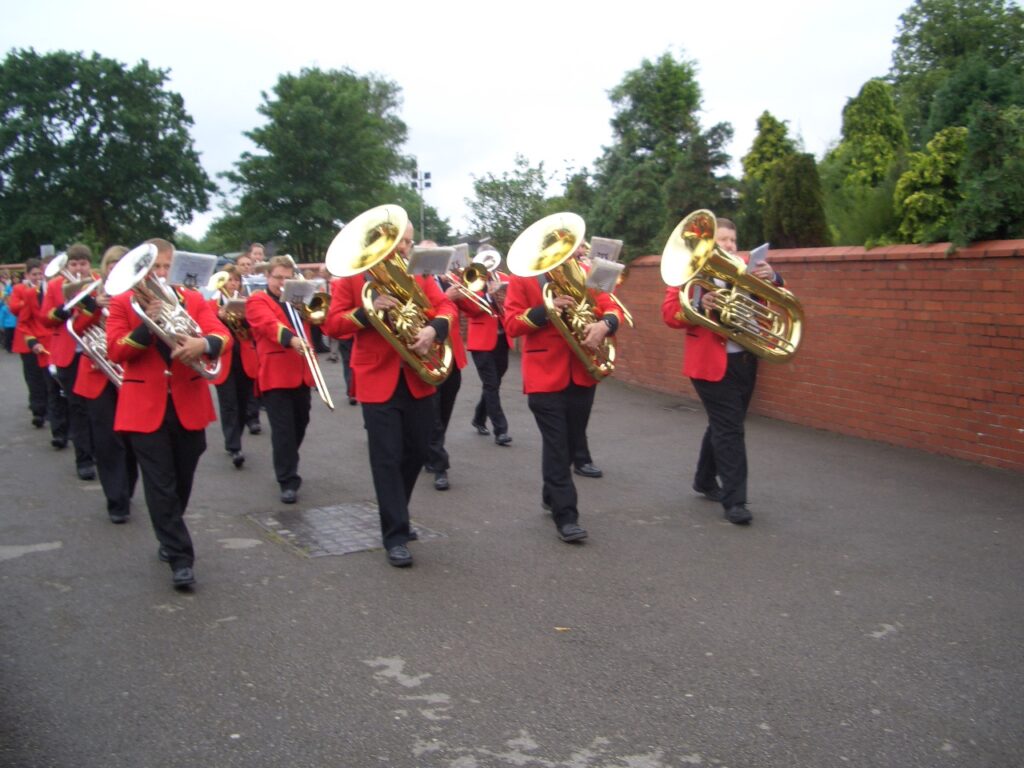 Churches, Clubs,  Unions and local organisations plus Brownies, Scouts, Guides, local schools, and Sunday schools take part, in either their uniforms, ‘Sunday best’ or costumes made for a given theme. There are ‘floats’ on the back of large farm flatbed trucks or tractors, in the past they would have been on horse drawn carts, the float decorated within an inch of its life on what ever that group or organisation theme is and meticulously planned for a whole year.  The more religious based processions, have large standards (or banners), declaring the title of the church or Sunday School carried by two strong members of the congregation with two spare to ‘tag team’ when they get tired, from the top of the banner are four ropes used to control it in less than calm conditions and from personal experience, quite an undertaking in North West winds,   then decorative streamers for the children to hold. These standards are precious, expensive and revered assets of the Church. 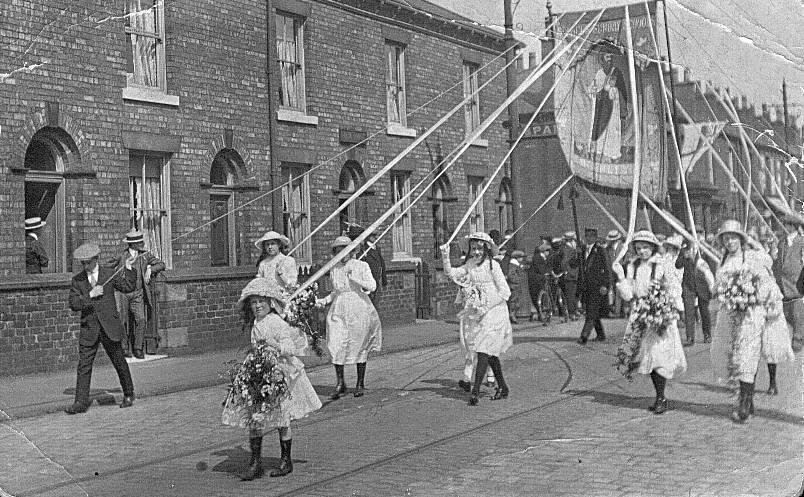 Some of the towns and villages have a Rose Queen who is a nominated by the Church or Sunday School to hold the post for a year and carry out local opening ceremonies and such like, more recently the Queens have carried fund raising activities for her chosen charity. The Rose Queens have a consort and/or a retinue. All beautifully dressed in floor length dresses, sometimes made by their mothers, or by a local seamstress who probably didn’t get much sleep on the run up to the big day

I wasn’t ever a Rose Queen, I wanted to be as I wanted a crown (who doesn’t) but my younger sister was and I was part of her retinue and remember having to wear angora knitted boleros and the wool got up my nose and in my eyes so in ever single photo I am mid sneeze or have my eyes closed!!! The Rose Queens of days gone by wore wonderful rose headdresses, this image is among other Lytham Rose Queens through the years on the Facebook Group  Lytham Past 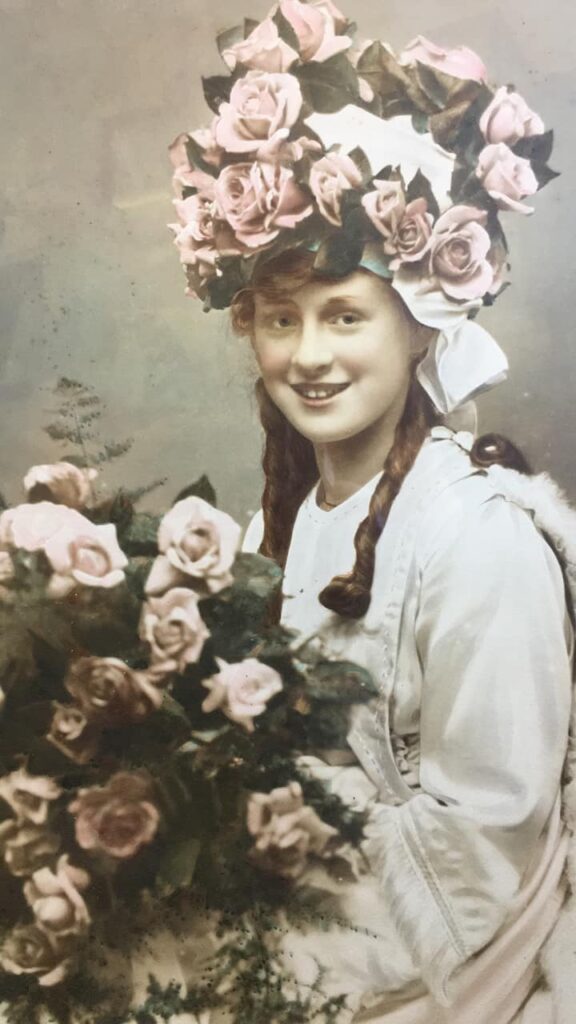 The procession meanders through the town or village in some cases covering a lot of ground, so much so on the lengthier  routes, the wise, or the most experienced walker take a change of footwear, so the Rose Queen and the local priests and vicars are often seen wearing trainers under their robes.

It would normally end up in the central point of a town, or a field (hence ‘Field Day’) where there would be the crowning of the incoming queen, entertainment, children’s races and adult completions for growing produce or baking. Now there is a traditional full blown Fun Fair on from the Thursday – Sunday for candyfloss, hot dogs and screaming! At Lytham Hall the outline is THIS 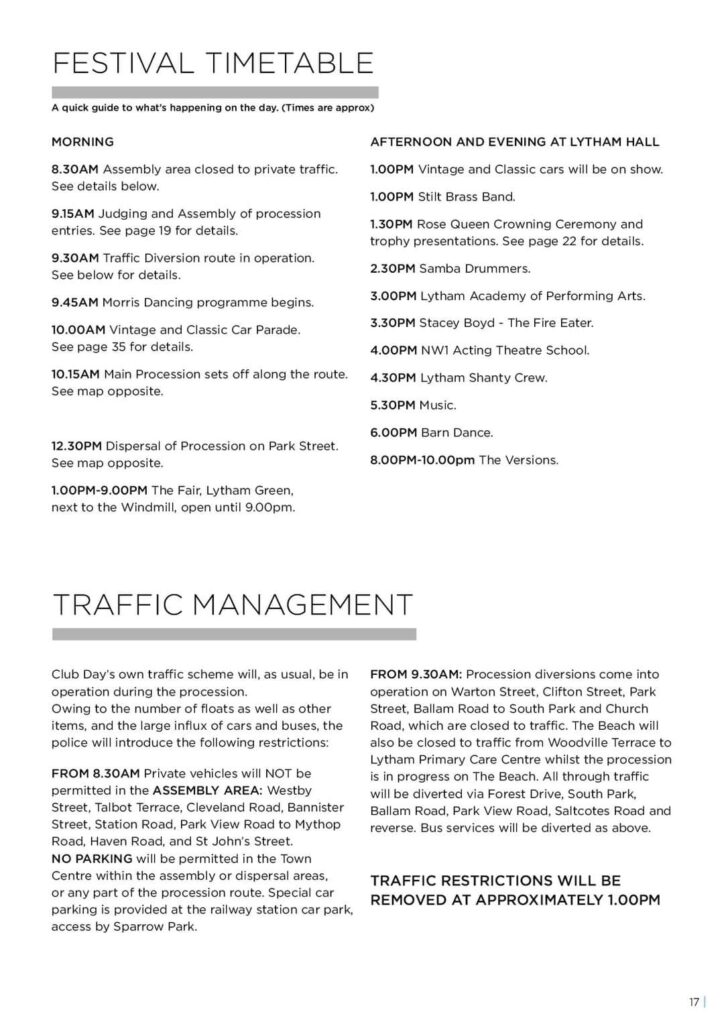 Lythams activities had been traditionally held at Lowther Gardens until it outgrew the space and is now at Lytham Hall just a short walk out of town, where Buses will take you from the Gate House down the 3/4 mile driveway. With the Fun Fair at the Triangle at the end of the Green 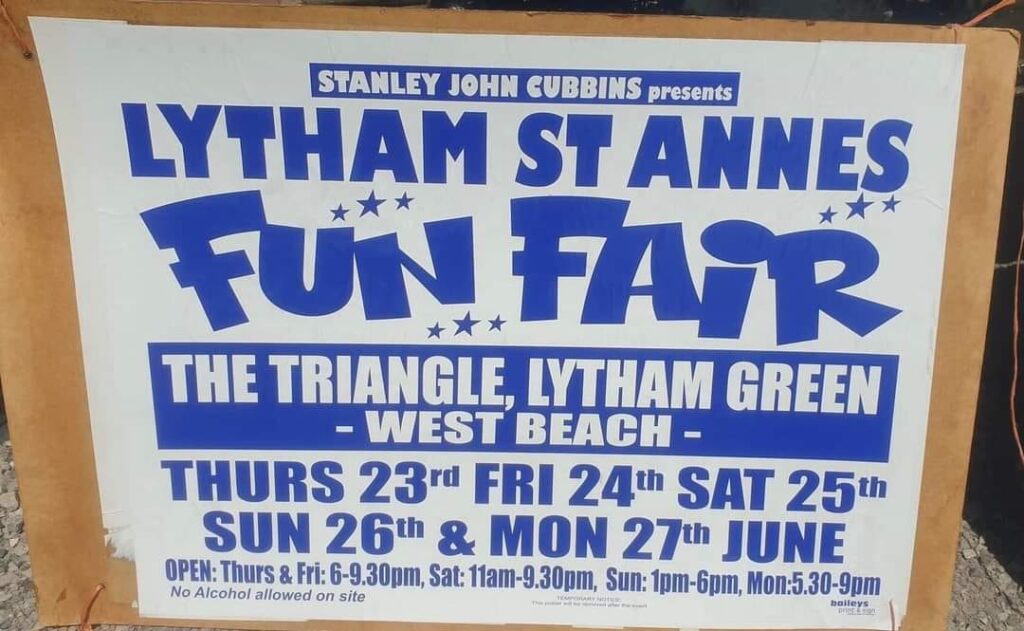 A very detailed report from the 1909 Club Day Carnival is HERE on the brilliant website amounderness.co.uk for all things historical in Lytham, St Annes and the Fylde

The usual* order of local larger club days is:-