For a good cause

So, why were Rotary members, invited guests and the cream of Lytham glitterati out in force on Friday night, because they can always be relied on to support a  Good Cause, and in this case it is the ‘Rise Against Hunger’ project.

A bittersweet project for Totally Rotary as first selected as a project by long standing Lytham Rotary Member Peter Woodhead who unfortunately passed in 2019, but the baton has been picked up by Liz Coupe, his daughter and Deputy Chair of the Totally Rotary ‘satellite’ group.

The Assembly rooms in Lytham had been transformed into an intimate fine dining restaurant with candlelight, crisp tablecloths, sparkling cutlery and glassware. Greeted at the door with a class of bubbly guests and gently coaxed by the very charming Harry Feeney to be snapped in front of the Rise banner.

When all seated, we were welcomed by Deni Middleton, who had kindly stepped up to the plate, at very short notice, for the Totally Rotary Chair Deborah Wilkinson who had been stopped in her tracks by a very nasty chest infection. Deborah was truly gutted but was sent regular updates and photos throughout the night.  Whilst sorting out ice buckets and iced water for the table, we were nobbled for raffle tickets by Lovely Liz Coupe (who could refuse her) and the equally lovely Christine Bentley, one of the hardest working women I know, who had already worked at the Foodbank that day and was on a litter pick the following morning, as well as her early morning bakery job. The purchased tickets proved worth it as it turned out later.  We had taken our own drinks as this pop up included corkage (what a great idea)! My friends polished of a Pink Prosecco between them and I found a acceptable (although a tad sweet) non-alcoholic bubbly.

Canapes were delivered to each table which included a compressed coronation chicken cube, a haggis bon bon and a mini duck pancake, that were such delicious little mouthfuls, it left us wanting more, but I THINK that is the general idea.  Liz asked if we could spend  few moments watching (what was) a moving and thought provoking ‘It starts with a meal ‘ video, which gave the uninitiated more info about the Rise project, you can watch for yourself here

Paul’s efficient crew then presented us with the starter, (in simple terms, but it certainly wasn’t simple) a Caprese salad – bocconcini mozzarella, roast red pepper coulis, pomegranate molasses, air dried ham wafers, watermelon, heritage tomatoes and although an everyday dish to the Italians, this elevated version was a perfect start to a meal.  The meal was also accompanied by the fantastic voice of local songstress Jane Dean (who is Harry’s daughter, we keep things in the family round here). The playlist included some Motown, some popular songs from recent years and songs from the shows, a personal favourite of mine ‘On my Own’, from Les Mis, I admit I did fill up.

A seamless transition then on to the next course of Slow cooked beef, pea & spring onion puree, dauphinoise potatoes, glazed baby vegetables, -rosemary honey and Port wine sauce. So you know how they say on some Chef-y/Foodie programmes that you could cut the meat with a spoon, well you could cut this beef with a spoon! It was so soft and succulent, oh and HUGE too. All potatoes SHOULD be Dauphinoise potatoes, and lovely veg with just the right amount of bite. I knew there was something in the sauce that was lovely but couldn’t but my finger on it, until I now read the menu again and it was rosemary. I do always wonder how chefs come up with the combinations they do? 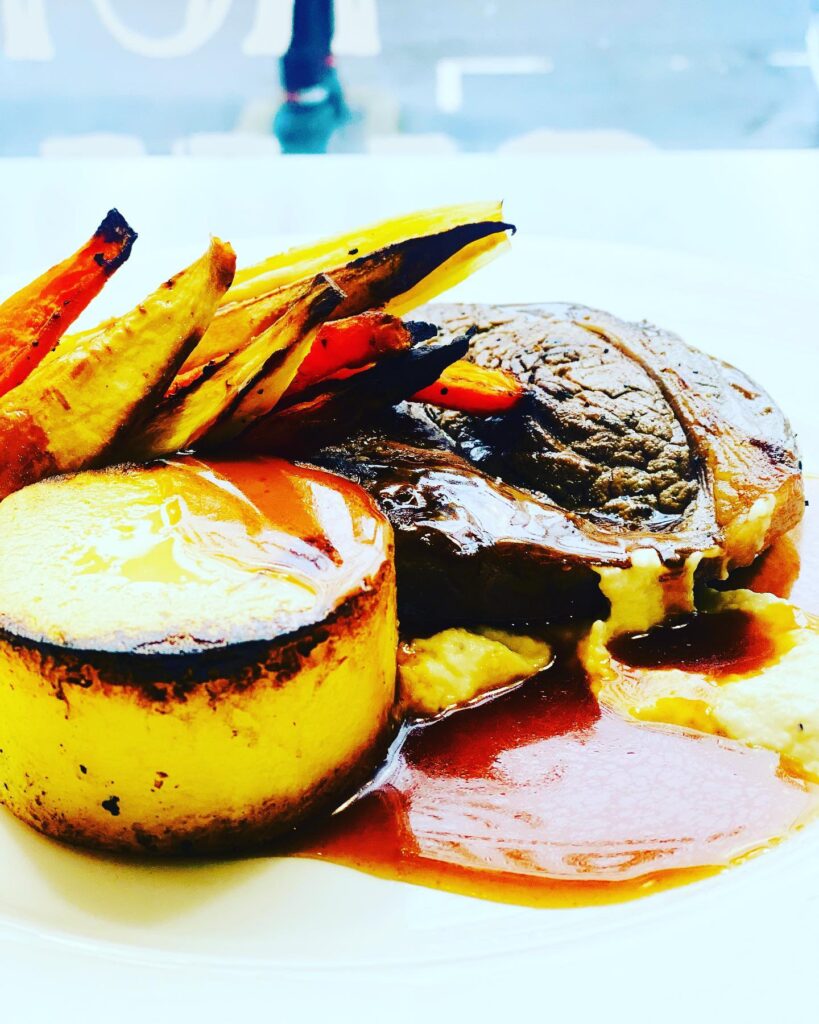 All too soon, the final course and pudding, but that too would be too simple a description. It was Vanilla & rhubarb cannelloni with Textures of rhubarb, Custard and crumble. This was a CLEVER dish, with a contrast to the tart pieces of rhubarb, (which I LOVE as they remind me of my grandma and her rhubarb pies), was the cannelloni which had a mousse wrapped in (I’m not really sure) but was the sweet element and along with the crumb and dots of custard was divine. It was served on a piece of slate and although the table then entered into a discussion of acceptable serving receptacles, some of which are really bizarre, we agreed we’d let him off.

Meal over Deni ran a Heads and Tails competition and called the raffle numbers for some incredible prizes, of which my friend won the most beautiful chocolate bouquet from House of Confections Couture.] and the main winner won a stay in a fabulous cottage in the Lakes, so gratitude for all the very kind people and businesses for their donation of prizes. With thanks to the people involved and rounding up Liz told the guests that a box costs just £75 to school and feed a child for a year. A poignant moment then when Liz’s granddaughter (who is one of Peter’s Great Granddaughters said her and her sister were buying a box). Of course, we bought one, and hope lots of others did too. Please contact us via Totally Rotary on FB here if you could forgo your next night out and buy one.

Then Jane revved up the pace and there was dancing!

All in all, a great night with superb company, and totting up the night and added to other Rise fundraising we have made over £6,800, which is amazing and shows what Lytham can do when we get together, that is true #lythamstyle fundraising!

Rise against Hunger is an global programme. The money raised helps us buy the raw ingredients that will be packed by volunteers into meal packs.

The final part of the Project will go ahead in May at St Bedes school when we will be hunting down a large number of volunteers to help us in the meal packing activities on the day. If you would like to be a  volunteer on that day or if you would like to become a Totally Rotary member, we would be delighted to have you on board and help us and Rotary carry out more Projects locally and further afield.

And if you get chance to try a pop up event from Chef Paul Rowley, grab it with both hands, failing that you could try a chef box or Sunday Roast Box from Pauls ‘Chicken Shop’ Le Roti on Park Street.

Huge thanks to all the people mentioned in this blog

Chef Paul Rowley (fourth from right) and his fantastic crew!

Written by Denize (Proud to be a Totally Rotary member)